María Queralt-Martín and Álvaro Inglés, winners of the SBE-33 prize 2017

The Executive Council of SBE has awarded the 2017 AntalGenics – SBE-33 prize to:

For her excellent investigations on the mechanisms of ion transport by protein channels in model membranes.

For his excellent work on the application of diverse biophysical methods to investigate the stability, structure and function of ancestral proteins. 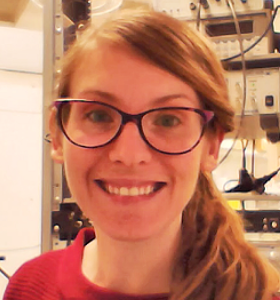 Dra. María Queralt-Martín got her B.Sc. in Physics and her M.Sc. degree in Biophysics in 2009 at the University of Barcelona (Spain) and her Ph.D. in Physics at the University Jaume I, Castellón (Spain), under the supervision of Professors Vicente Aguilella and Antonio Alcaraz. Her research focused on the study of ion transport mechanisms of protein channels in model membranes; in particular the OmpF channel from E. coli. She has also studied the interactions of the mitochondrial channel VDAC with monomeric tubulin during her stays at the group of Prof. Rostovtseva at the National Institute of Child Health and Human Development – NICHD, National Institutes of Health – NIH, Bethesda (USA). The quality of her predoctoral work has been recognized with a PhD Special Award (2015) by the University Jaume I (Castellón, Spain). In 2016 she joined Dr. Berzukov’s laboratory at NIH to study the molecular mechanisms of mitochondrial toxicity by alpha-synuclein, a disease-related amyloid protein, and its interaction with the voltage-dependent anion channel. 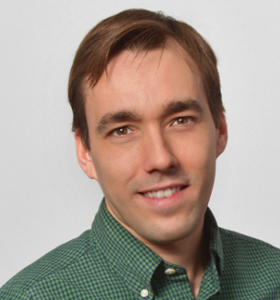 Postdoctoral fellow at the Institute of Science and Technology – IST-Austria (Klosterneuburg, Austria).

Dr. Álvaro Inglés got his M.Sc. degree in 2009 in Protein Structure and Function at the University of Sevilla (Spain) and in 2012 he obtained his Ph.D. in Chemistry at the University of Granada (Spain), under the supervision of Prof. José M. Sánchez Ruiz. His work focused on understanding how the biophysical properties of proteins change during evolution and use this knowledge to re-engineering proteins. He has characterized ancestral (Precambrian) proteins in terms of stability, structure and function. In 2013 he moved to the laboratory of Prof. H. Janovjak at the Institute of Science and Technology – IST-Austria (Austria) as a postdoctoral fellow, where he is working in the field of synthetic biology. In particular, he has developed a general strategy to control receptor tyrosine kinases with light.

About the AntalGenics – SBE-33 Prize

Recognizes the work of outstanding young Biophysicists under 33, independently of the country where their work has been done.

Outstanding young Biophysicists under 33, independently of the country where their work has been done. Preference is given to members of the SBE.