Brain drain / brain gain (with a focus on Spain) 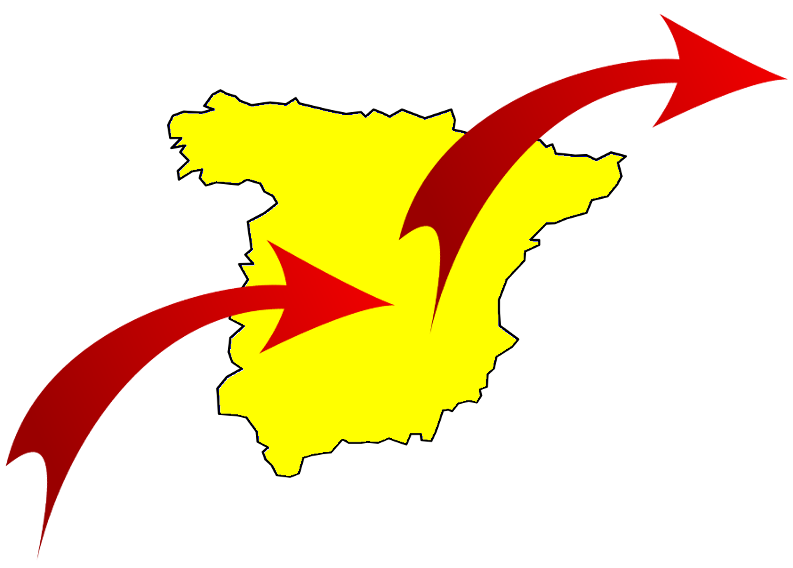 Science is a global activity. Hence, countries need to adopt open human-resource policies to be competitive internationally. There are many reasons to defend transnational mobility in science, but a simple and practical one is that the chances to attract the most talented individuals increase with the number and diversity of possible candidates, which will obviously be larger in the global pool than in regional or national pools. It is on this ground that the rate of foreign scientists and students has been for a long time identified as a key factor for innovation and economic competitiveness. A positive net transfer of human capital (brain gain) to a particular country has immediate consequences for the quality of its research, technology and education institutions. It has also mid-to-long term consequences for its capacity to innovate and grow, and in turn exerts a positive feedback which increases the attraction of ever more talented scientists. Not surprisingly, a recent study [1] which discusses data from the GlobSci survey [2,3] shows that developed countries exhibit high proportion of foreign scientists, of which the proportions of postdocs dominate clearly over the proportion of professors (Figure 1). 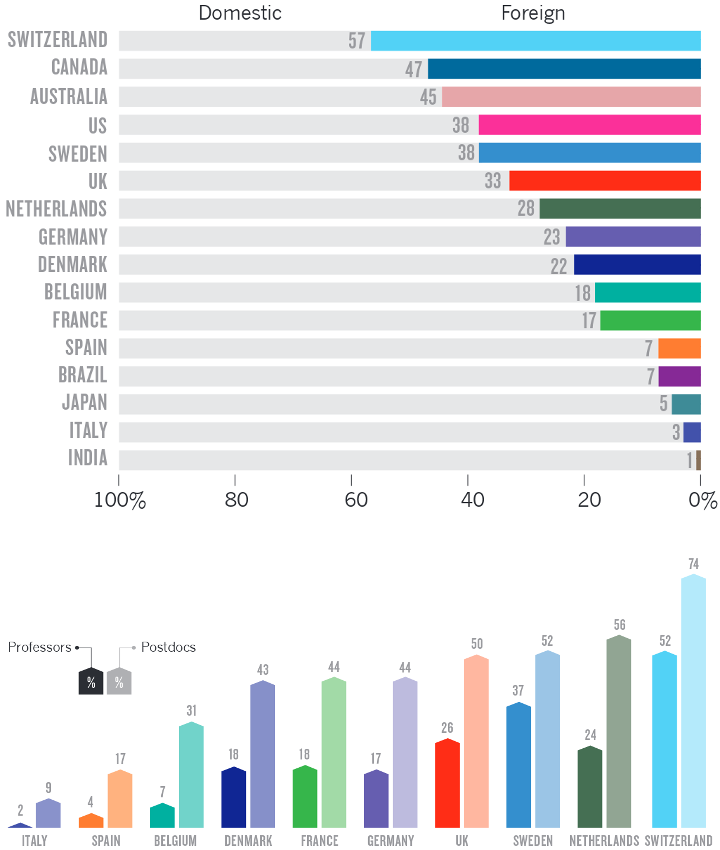 Figure 1. Proportions of foreign scientists in 16 countries according to the GlobSci survey [1–3]. The bottom bar graph distinguishes shares of postdocs and professors in the European countries appearing in the top graph. Adapted by permission from Macmillan Publishers Ltd [1], © 2012.

Spain is near the bottom of that group of countries, with a modest 7% of foreign scientists, clearly away from the values of main talent attractors. The weak talent attraction of Spain is much more clear when we look at the proportion of foreign professors (only 4% of total professors in the country). We can foresee that this poor performance won’t be helpful for the future development of Spain; but there can be also immediate effects, like those derived from the impact of foreign talent on the ability to capture funds from very competitive international calls. A good example in the European context is ERC funding [4]. If we examine the results of recent ERC calls, we will see that a large proportion of successful grantees are foreigners in the country of their host institution. For example, in the 2105 call of ERC consolidator grants [5], among the most successful countries, 65% of the winner projects from the UK, 52% from Switzerland, 31% from Germany, 25% from France, 34% from the Netherlands and 28% from Spain correspond to foreign scientists. A rough comparison of these numbers with the shares of foreign scientists given in Figure 1 empathizes the importance of foreign scientists for attracting resources and demonstrates the potential of open human-resource policies to self-compensate, even at short term, for the economical efforts needed to implement them.

Specific data shows that in successful talent attractor countries a large proportion of foreign scientists goes hand in hand with similar proportions of outgoing national scientists (Figure 2, example cases of the UK and Germany). It thus seems that the talent attraction of these countries does not cause excessive retention of their own citizen scientists. Instead, a good proportion of them look for better opportunities in other attractive countries. This illustrates the existence of a mobility culture among scientists in advanced attractor countries, where the availability of a large pool of positions and sufficient resources allows reaching a state defined as brain circulation [7]. In contrast, the mobility numbers show disparity in weak attractor countries. Spain has low mobility numbers in either direction, while Italy has very low incoming of foreigners and large outgoing of nationals (Figure 2). Spain is thus positioned in a low mobility, close to equilibrium, situation, whereas Italy seems clearly in a loosing brain drain state. 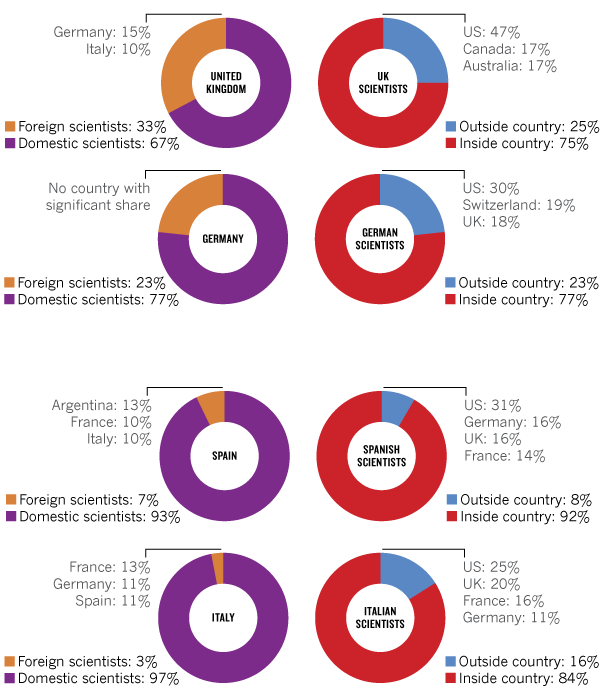 Figure 2. Side by side comparison of incoming-foreign and outgoing-national scientists. Proportions of incoming foreign scientists (left) and outgoing national scientists (right) for a selection of European countries. The countries of origin or destination are specified if they correspond to at least 10% of total migrating scientists. The graphs are generated using the interactive tool provided in the online version of reference 1 (Adapted by permission from Macmillan Publishers Ltd [1], © 2012), using data from the GlobSci survey [2,3].

The main driving forces for scientists to move to another country are the search for opportunities to improve their future and the availability of outstanding colleagues [3]. In order to provide these conditions, there must be a good level of economical resources in the attractor country. Additionally, a large number of available science and technology positions and flexible, talent-based recruitment procedures, facilitate brain circulation, allowing large proportions of both, incoming foreigners and outgoing national scientists. In fact, there is a good correlation (Figure 3) between the talent retention capacity of a country and its economical effort in Research and Development – R&D (gross domestic expenditure on R&D – GERD, as % of the gross domestic product – GDP). Clearly, long-term talent attraction and retention have a lot to do with sustained R&D investment, like in the cases of North-West European and Scandinavian countries, exemplified by Germany and Sweden in Figure 3. However, there can be also other factors (social, cultural and political) influencing the capacity of a country to attract excellent scientists, as indicated by the cases of the UK (in the attracting region, despite a moderate GERD) and France (in the loosing region despite good GERD values). 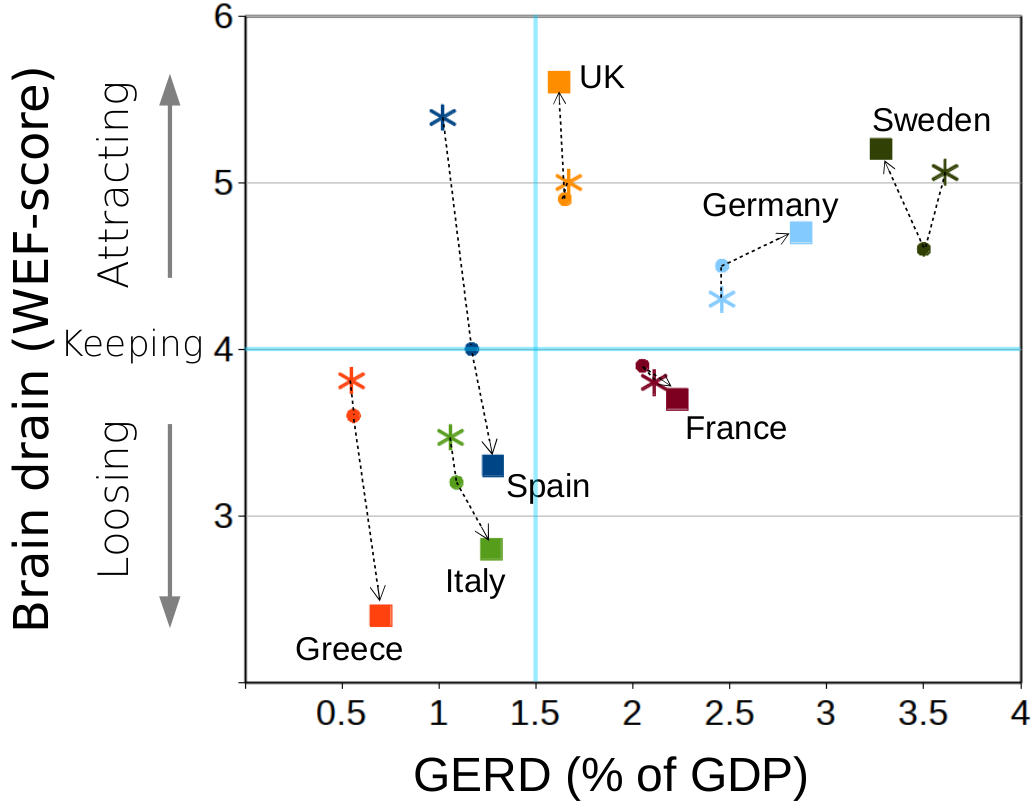 On the loosing side, with low R&D support , are South European countries (Figure 3, cases of Greece, Italy and Spain). These countries also exhibit strong vulnerability in periods of economical crisis, as seen by the very negative evolution of their brain drain values during the 2003-2013 decade. The case of Spain is peculiar. It enjoyed good talent retention at the beginning of the 21st century (2003 – 2004), despite a low GERD. However, this potential has dropped dramatically in a decade, down to the brain drain loosing area. The instability and negative evolution of the South European countries contrasts with the positive evolution during the same time period shown by the talent attracting North-West European countries, and demonstrates that in the global science market the negative balance, brain drain of some countries is quickly profited by best positioned attracting countries.

To sum up, the mobility of scientists is critical for competitiveness and must therefore be promoted. To warrant a sound brain circulation, there is a need of sustained R&D investment and a quality-based, open human resources policy, with a flexible and fair recruitment system. This will not only attract best foreign scientists, but it will also facilitate the return of top national scientists.