From Tenerife to King George Island: An Antarctic Adventure

Endotherm (“warm-blooded”) animals -such as humans- as well as warm ectotherm animals, function physiologically at temperatures ranging approximately from 17 to 42ºC. We, endotherms, achieve this thanks to our biological thermostat, which ensures that, regardless of the outside world temperature, membranes and proteins in our cells are always maintained at their optimal temperature.

However, life also occurs at the extremes, where not all animals are able to control their internal temperature. For instance, invertebrates in the Antarctic Sea live all year long at temperatures around -1ºC, which would be harmful for us. Even so, and due to evolutionary adaptations, they are able to perform all their physiological functions as efficiently as their relatives of warmer environments. How is this possible?

A crucial physiological mechanism that must adapt is the transmission of bioelectrical signals in neurons and excitable cells, which are responsible for most of the physiological responses and behaviour. In excitable cells, action potentials are generated by specific proteins responding to changes in voltage across the cell membrane, i.e., voltage dependent ion channels. Sodium channels open during the depolarizing phase, whereas potassium channels are responsible for repolarization. In fact, the fine-tuning of the latter gives shape and determines duration of action potentials, which is key to allow firing of subsequent spikes. Generation of action potentials is temperature dependent, due to the higher Q10 values (rate of change for a 10ºC temperature increase) of voltage dependent channels. This means that ion channel proteins from Antarctic organisms would have similar gating kinetics to channels from organisms living at warmer temperatures! What are the evolutionary adaptations of these channels that make them able to sustain electrical activity at temperatures that are harmful for animals living in more temperate climates?

There is one place on Earth where this question can be addressed:

Antarctica is dedicated entirely to Science. Uninhabited by humans, it belongs to no country. It is also the coldest and windiest place on Earth!

As part of an exciting scientific and personal adventure, I teamed up with my colleagues Patricio Rojas, María Pertusa and Bernardo Morales from the Universidad de Santiago de Chile – USACH to present a research proposal to the Antarctic Institute of Chile – INACH. 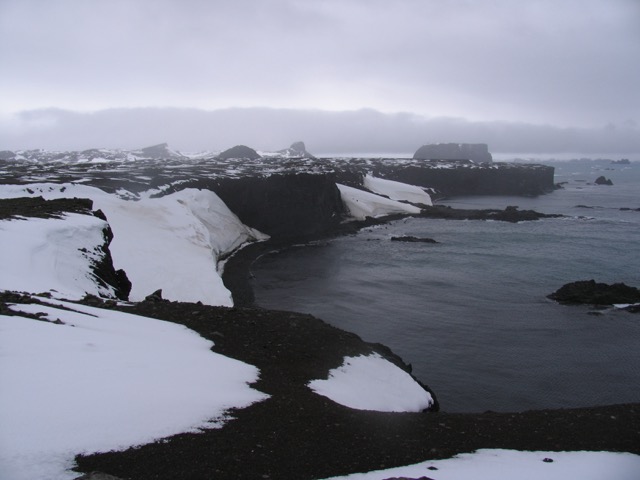 We proposed to study electrical signalling and to characterise biophysically voltage-gated potassium channels in Nacella Conccina, an Antarctic limpet. Within the framework of the Antarctic Treaty System, and associated to the Chilean Ministry of Foreign Affairs, INACH encourages the development of scientific research and innovation in Antarctica. Several projects are selected each year through a competitive call to perform research at any of the seven Chilean scientific Bases in Antarctica. One warm day, great news arrived to Tenerife from Santiago de Chile: our project had been granted. Our adventure had officially begun!

As a scientist, going to Antarctica is a dream. Protected by the Antarctic Treaty, it is the only place on Earth that belongs to no country, is not inhabited by humans and is dedicated entirely to Science. Interestingly, it is also the coldest and windiest place on Earth! Getting there is not easy. There are no regular flights and weather conditions are often extreme and unpredictable. Not surprisingly, countries closer to the White Continent have easier access to working there. With my lab settled in Tenerife, more than 10000 km away from the Antarctic Circle, one could think that the chances to participate in a research project in Antarctica would remain a life-lasting scientific wish. However, serendipity and good fortune are often cited as key factors in making science…

On February 19th, 2015 I took off from Los Rodeos airport with a backpack full of small electrophysiological gadgets and my brain plenty of excitement. Final destination: Scientific Base Julio Escudero, King George Island (62°12’57″S 58°57’35″W, Antarctica). First stop was Santiago de Chile, where I was joined by my colleague Patricio Rojas. After a couple of days, used to gather last minute gear and to acquire technical outerwear, we flew together to Punta Arenas (Chile). The larger equipment (microscopes, amplifiers, etc.) had been sent South in three large boxes a week earlier.

In Punta Arenas, the spirit of the Antarctic explorers is alive at every corner. The INACH building used to be the post office from where Scott and Shackletton sent letters during their explorations and the Antarctic wind blows from the Strait of Magellan. Traditionally, there were only two ways of travelling to King George Island from Punta Arenas, both arranged for the scientists by the INACH: by boat (crossing for five days the turbulent Drake Passage) or by Hercules planes from the Chilean Air Force. A third option is now available thanks to a charter airline (Aerovías DAP), which was the one scheduled for us. 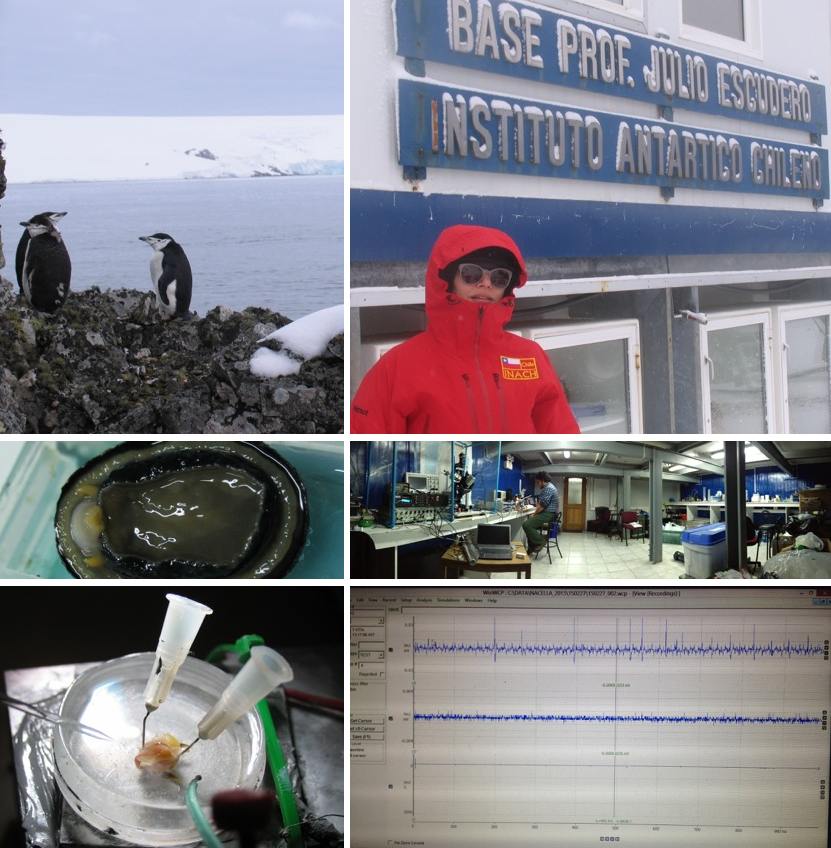 Top-left: Chinstrap penguins in front of Nelson island’s glacier. Top-right: Teresa at the entrance of Base Escudero. Middle-left: The limpet (white stuff is the head). Center-right: Panoramic view of the lab. Bottom-left: Limpet head ready to be recorded. Bottom-right: “Reading the limpet’s mind”.

We arrived to King George Island on February 23rd. My first impression was bewildering. Huge volcanic rocks covered with ice and snow, untouched; a striking contrast of black and white. It was summer, so temperatures were not very cold (around 0ºC). We were received by the Chief of Escudero Base, Javier Arata, who drove us to the Base. Our laboratory was in the basement, and the dorms in the first floor. Our equipment boxes were already there, waiting to be opened. We had arrived to the white continent to do science.

We spent the following two days building two electrophysiology setups that we would use to record extracellular signals. Temperature was controlled using a homemade device consisting on an Arduino board and a peltier. This system would allow us to study the spontaneous firing of Nacella concinna’s buccal ganglia, a neuronal structure responsible of control of mouth musculature.

Time in the laboratory was combined with numerous field trips along Fildes Bay, in search for limpets. They are fairly easy to get at the rocky intertidal zone. We recorded extracellular spikes in the buccal ganglia, after applying slow temperature ramps ranging from 2 to 15 °C. Although our analysis is still undergoing, our results show three types of firing patterns: high rate at low temperatures, high rate at high temperature, and temperature independent. Regardless of the firing frequency, most recorded units decreased their activity at temperatures higher than 17 ±1 °C, suggesting that the nervous system of this organism is not adapted to live in Pacific or Atlantic coasts where other taxa from the same genus are found. Moreover, opposite spike polarity was observed in different units, suggesting that the generation of some action potentials occurs outside the ganglia. Further analysis is still needed to strengthen our conclusions.

Apart from the electrophysiological recordings, we also extracted many tissue samples for further work in our respective labs back home. Transcriptome data, published only last year (Fuenzalida, et al. Mar Genomics. 2014;18 Pt B:89-91) reveals the expression of voltage and calcium activated potassium channels, several ligand activated channels and other channels from the TRP family that are expressed in thermo-receptors of both invertebrates and vertebrates. In our laboratories, we will now extract RNA from Nacella tissue to clone the potassium channels that will be expressed in heterologous expression systems and characterized biophysically.

More things one can do at King George Island 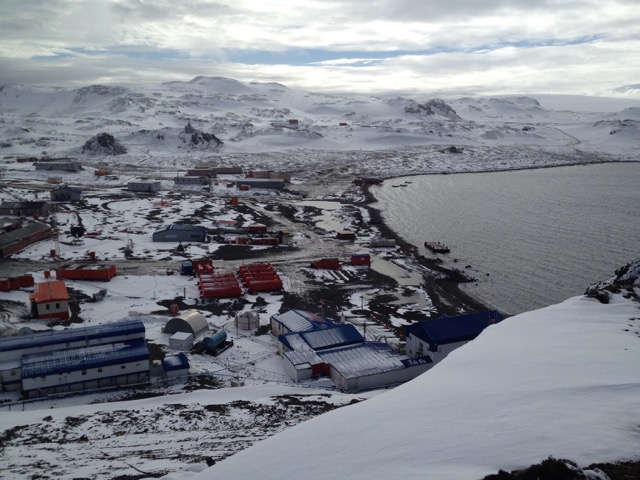 But this was not the only science being made at Escudero Base. There were around 30 other scientists from Chile, Brazil, Venezuela and Portugal, from diverse scientific fields: Marine Biology, Geology, Physics… The base was organized and maintained by INACH staff: the chief of Base, a logistics operator, two boatmen and four craftsmen. We were fed by two cooks. The atmosphere was fantastic!

Outside the Base, many Antarctic animals can be seen. Penguins would be our usual companions in our way to catch Nacella. We also saw many sea lions, Weddell seals, elephant seals and skuas. Some afternoons we would walk along the beach to enjoy the silence and beauty of such wild landscape.

We had also time to visit some of the other six Bases in the Island: Artigas (Uruguay), Bellinghausen (Russia) and Great Wall (China). Other Bases such as King Sejong (Korea) or Arctowski (Poland) are only accessible by boat or helicopter.

On march 11th, after carefully packing our equipment again, we waved Antarctica goodbye while getting into a DAP plane which would fly us back to Punta Arenas. We carried our computers full of recordings to analyse and many RNA and tissue samples. In our hearts, the wish to come back someday and the words at Scott memorial rumbling into our heads:

To strive, to seek, to find, and not to yield…