Felix Ritort, UB, Barcelona (Spain); DPL and 1st BioforPhys conference chair.
download
On the 15-18th of January 2017 took place in Barcelona the 1st Biology for Physics Conference – BioforPhys17 organized by the Small Biosystems lab from the University of Barcelona under the auspices of the Division of Physics for Life Sciences – DPL from the European Physical Society – EPS.

Since the dawn of modern science, physics has developed the measurement tools for quantitative inquire, and provided mathematical laws to describe and understand the world around us. In turn, physical methods have found applications in biology making it the quantitative science that it is nowadays. However, despite this progress, living matter has astonishing features that, when confronted to those of inanimate matter, make physicists suspect that they are missing something in their understanding of the living. The main goal of the conference was to debate the question: Is there new physics in living matter?.

The main goal of the conference was to debate the question: Is there new physics in living matter?The conference gathered about 170 participants and took place in the auditorium of the Barcelona Biomedical Research Park – PRBB. Talks were presented by about 30 internationally leading experts who have made outstanding contributions in their respective fields, and for whom physics is a source of inspiration for better understand biology. In addition to talks we had ample time (4 hours in total) for poster sessions with 120 posters, mostly presented by young scientists, the core of the participants in the event.

The conference opened on Sunday 15th evening with a reception followed by a keynote talk by Uri Alon from Weizmann Institute who talked about general laws governing genetic circuits and biological traits of organisms. Dr. Alon ended his talk with a nice and inspiring classic guitar show about science and emotions. The monday 16th morning session started with the talk by Carlos Bustamante from the University of Berkeley who started quoting Jacques Monod and emphasized the feedback between chance and necessity to make complex biological structures. Other talks in that session ranged from neuroscience to collective biological motion and self-organisation of cell structures. The afternoon session started with Cees Dekker from TU Delft and Antoine Triller from the ENS in Paris, who talked about designing synthetic cell structures and the mystery behind the stability of long-term memory, respectively. Finally, I. Junier (Grenoble) and O. Rivoire (College de France) discussed the physics of several regulatory processes (protein folding, DNA replication and transcription) from an evolutionary perspective. 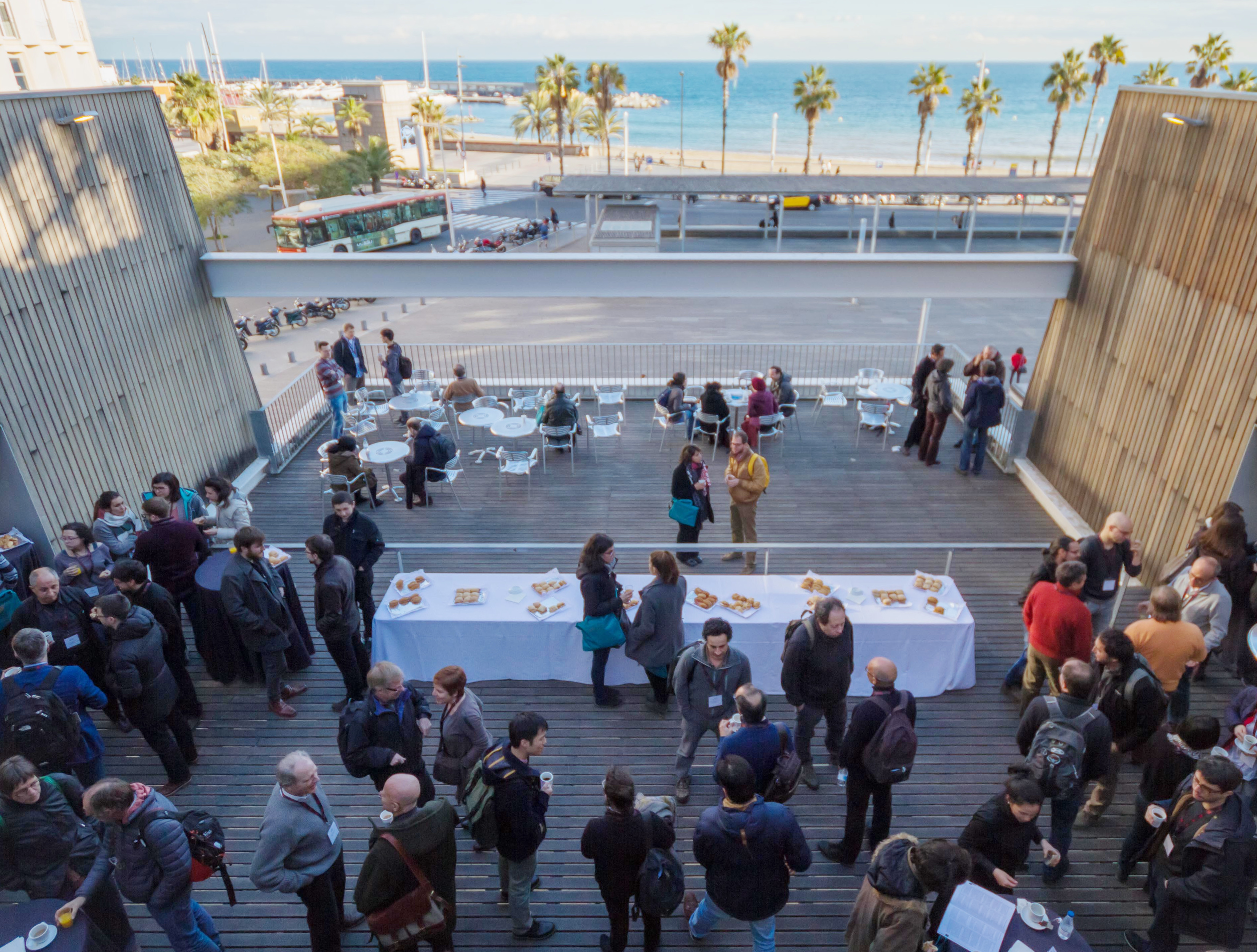 Attendees to the 1st BioforPhys conference, chatting at an outdoor coffee-break.

Wednesday session started with talks by Jacques Prost from Institut Curie (Paris), who showed examples of biologically inspired problems leading to new physical concepts. This was followed by talks on the physics of morphogenesis (S. W. Grill from TU Dresden and C. P. Heisenberg from IST Austria), cell migration and biological self-organization. The conference was ended by a beautiful, inspiring and provocative talk by Erik Van Nimwegen on the physics of evolution and the physical meaning of concepts, such as fitness landscapes.

The conference had five nice moments I would like to underline. One was the evening poster exhibitions in the outside on Monday and Tuesday (17h-19h) that, despite of the exceptional strong cold we had those days in Barcelona, was softened by mushroom heaters and hot chocolate served for the youngsters and the not so ones. Second, the relaxing piano recital on Monday at 19h in the auditorium offered by the talented Italian pianist Patrizia Marcatello who played 5 pieces: Ludwig van Beethoven (first piano sonata), Frederic Mompou (first Catalan dance and song, and a variation of one of Chopin’s preludes), Ennio Morricone (Playing Love from the movie Legend of 1900 directed by Giuseppe Tornatore) and Claire de Lune from Claude Debussy. Third, the excellent conference dinner event at Hotel W in the Barcelona seashore that was followed by drinks and dance at the 26th floor of the Hotel W. Fourth, the poster prizes given to the best six posters of the conference selected from a committee chaired by Udo Seifert. Fifth, the round table scientific discussion that followed after the morning session of Tuesday. It was moderated by the conference chair and led by five among the invited speakers (Mackintosh, Prost, Bustamante, Grill and Shaevitz). The debate spontaneously organized and gently evolved (as biological matter does!) into a fruitful discussion were participants asked many interesting questions about the main theme of the conference: Is there new physics in living matter?

Two were the main conclusions of the conference in regards to the main question. First, it was acknowledged that biology truly provides new problems and questions that require novel theoretical and experimental approaches that contribute to fast expanding the domain of physical sciences. Second, biology is still waiting for an answer to the most intriguing question, i.e. where does all this marvellous complexity come from? Throughout the conference we heard appeals to Schroedinger (What is life?), Jacques Monod (Chance and Necessity) and R. P. Feynman (What I cannot create I do not understand). However it is clear that we are missing something in our understanding. What makes living matter emerge against irreversibility and the fate of the Second Law? Evolution hides the mistery! it was often heard in the conference. Biology has no meaning outside the evolutionary context. Are there new physical laws hiding inside evolutionary forces? Surely, this and other will be questions to address in a future second BioforPhys conference.