Three years after the foundation of the Spanish Biophysical Society – SBE in 1986, the II Congress of the Society was celebrated in Seville, with Prof. José López-Barneo as President. At that time, two main motivations led Prof. López-Barneo to organize the meeting: i) The need to foster quantitative research at the molecular and cellular level in our country, by organizing conferences in the field of biophysics and ii) the aim to establish ties between Spain, Portugal and South America. Therefore, the II Congress of the Spanish Biophysical Society was renamed I Ibero-American Biophysics Congress.

Almost 30 years later, the Organizing and Scientific Committees of the XVI SBE Congress still share both motivations. The diversity of topics tackled by the Society members and, specifically, the XVI SBE Congress participants, reveal how interdisciplinary is Biophysics, with a specially high impact in Medicine and Biotechnology. Indeed, it is difficult to fully understand any molecular or cellular mechanism without quantifying it. To strengthen ties with South America through contacts with LaFEBS, we invited Prof. Amodeo as a Plenary Speaker. Likewise, the partnership with the Portuguese Biophysical Society in the Symposium on Cellular Biophysics as part of this Congress expressed the nexus with Portugal. In summary, the XVI edition of the SBE Congress has brought together 210 participants and 94 talks. Among these participants, 35 young researchers were awarded fellowships supported by SBE (31 fellows) or the International Society of Magnetic Resonance (4 fellows).

The scientific program comprised six Plenary Lectures that were given by excellent speakers. Having the opportunity to listen to Profs. José López-Barneo, Alan Fersht, Anthony Watts, Gabriela Amodeo, Jesús Seoane and Yifan Cheng was, without any doubt, a great pleasure. We also celebrated eight Parallel Symposia focused on the most challenging topics in Biophysics. Two of these Symposia were supported by the Spanish Channel Network and Chemistry and Physics of Lipids / Elsevier; a third symposium was jointly organized by the Spanish and the Portuguese Biophysical Societies. Symposia included guest lectures by well-recognized scientists as well as short communications, which were selected from the submitted abstracts. In this regard, we made an effort to give preference to young researchers from all institutes and universities of our country.

The result was a fascinating and impressive scientific program, which although busy, left ample time for lively discussions during coffee breaks and lunches, as well as a cocktail after the Opening session and a Congress dinner after the Closing session. The program included the Poster Party session on Wednesday (June 7) afternoon, where young scientists had the opportunity to present and discuss their recent scientific achievements. This Congress edition awarded a prize to the two best posters, sponsored by SBE and, as a novelty, by FEBS Letters. Regarding SBE awards (named Manuel Rico, Enrique Pérez-Payá and SBE-33 awards) our society recognized the scientific trajectory of six outstanding researchers in our field, whose talks were scheduled on Thursday (June 8) before closing the Congress. Altogether we hope the 16th SBE Congress met all your expectations. 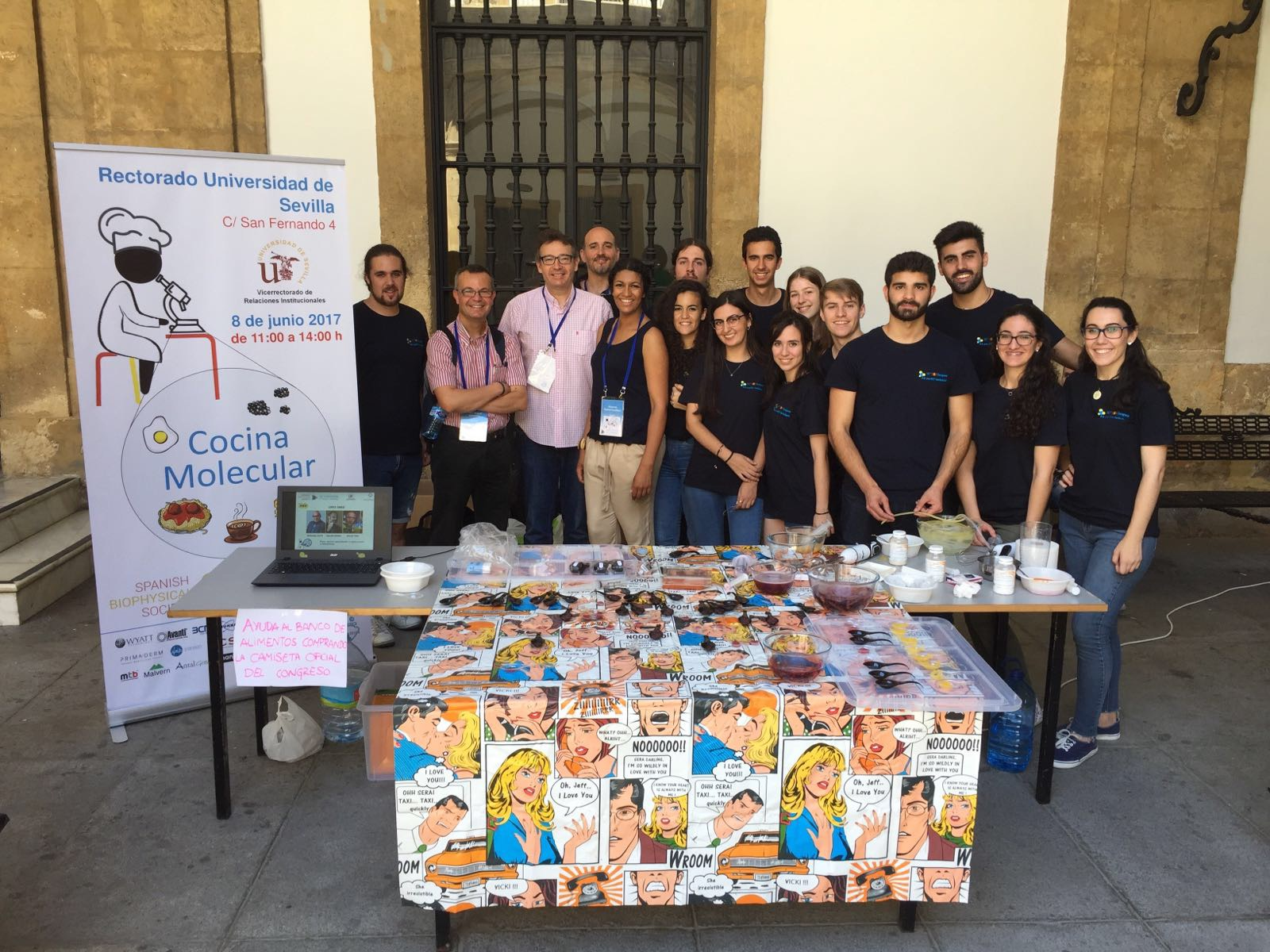 Attendees to Molecular Cooking, within the outreach activity Biophysics in the City.

A singularity of the XVI Congress of SBE was the outreach activity Biophysics in the City, which aimed to bring Biophysics closer to Society. The activity, named Molecular Cooking, took place on Thursday morning (June 8th) at the Rectorate of the University of Seville and dealt with the physical-chemical techniques used in molecular and avant-garde cuisine.
Another singularity was the inclusion of a search tool in the website of the congress which allowed access to abstracts by keywords. In addition, a survey to know feedbacks from participants was also included in the web account of each participant, from where it was possible to download a certificate to the Congress. Thanks to the effort of Editors of Biofísica, a Special Issue with all abstracts presented during the XVI SBE Congress was published.

As Chair of the XVI Congress of SBE, I would like to end by thanking all participants attending the Congress of our Society. In particular, thanks to the invited speakers as their acceptances allowed us to curate an excellent list of lecturers, thus making the Congress highly attractive, as the high participation – 210 delegates – corroborated. I really appreciate the invaluable advice in the organization of this Congress from Prof. Miguel A. De la Rosa, Rafael Fernández-Chacón, Pedro M. Nieto, Antonio Díaz-Quintana and all members of the Biointeractomics Group who spent a lot of time in preparing this event and were willing to help you during the days at cicCartuja. In addition, I would like to thank Viajes El Corte Inglés PCO and the EffiSciences company, for their support with logistics and designing the website of the Congress. Last, but not least, I could not forget to mention SBE and the University of Seville for their funding, as well as our Sponsors and Exhibitors in this Congress edition: AntalGenics, Avanti, BCNPeptides, Bruker, Elsevier, FEBS Letters, Hamamatsu, Iesmat, Ismar, Malvern, Primaderm, TA Instruments, Labclinics, Lasing, MTB, Nanion, NanoTemper, Pall-FortéBio, Paralab and Wyatt.

About the II Spanish Biophysical Congress held in Seville in 1989, José López-Barneo said:

Among the activities or events that I have organized, this is one of the most satisfying, despite the fact that it required a lot of work. It has been more than 25 years since then and I still hear Spanish, and foreign colleagues, remembering in an endearing way what it meant for them.

From our side, organizing the XVI Spanish Biophysical Congress in 2017 has been also an unforgettable experience and, without any doubt, one of the events that has enriched our professional lifes. Beyond the scientific and social commitment of the Organizing Committee, we really expect that this Congress had stimulated the research vocation of young participants in the well-established and interdisciplinary field of Biophysics. In parallel with the Congress in 1989, we wish that all participants have nice memories of these days at cicCartuja and at Seville, if possible, at least for the next 25 years!.