A conversation with Txema Pitarke 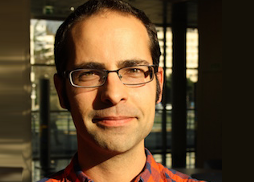 Txema Pitarke (Bilbao, 1960) has since 2000 been a full Professor of condensed matter physics at the University of the Basque Country – EHU/UPV. I meet him in his office of director of CIC nanoGUNE (Donostia-San Sebastián) to discuss about the relationship between biophysics and nanoscience. In fact, his research has never come close to the realm of biophysics. Instead, Pitarke’s work has focused on topics like electron dynamics, graphene, carbon nanotubes… “It’s not for a lack of interest”, he says, “but more due to some sort of vertigo” that he has felt when confronted with such complex systems as those in biology. “For a condensed matter physicist used to working from first principles like myself, biological systems are simply too complex”. Pitarke refers to the endless number of assumptions that one has to make in order to handle the intractable complexity of living systems.

However, at some point just over 10 years ago, he gestated what would later become nanoGUNE, the Basque flagship for research in nanoscience and nanotechnology. Creating this research centre involved considerable work to identify strategic research areas of biology at the nanoscale. “The research centre might have well been organized around my own research interests”, he says, “however I decided to make it orthogonal to them. My vision was that it should be a small centre, but at the same time extremely interdisciplinary, combining chemists, physicists, and biologists, all working at the nanoscale.” Because “nanoscience is not about what we study, but where”, as it is the nanometer scale that concerns nanoscience. “At the nanoscale everything converges, so we need people with very different backgrounds in order to make a contribution. And remember that the nanoscale is also the scale of the most primitive biological systems”. 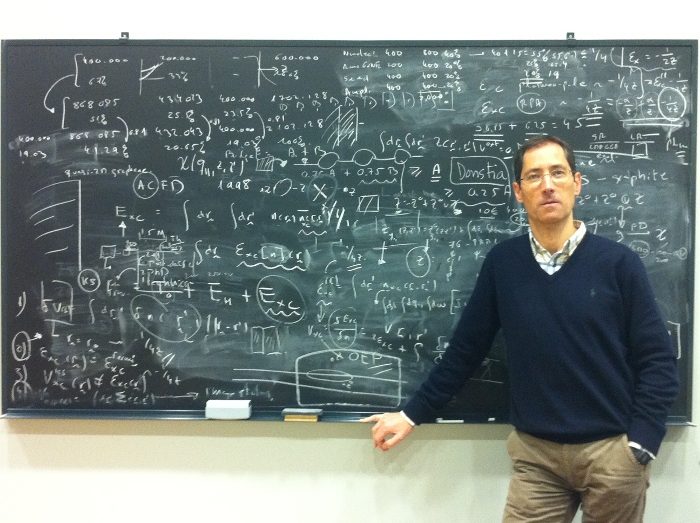 Self assembly: A common ground for Biophysics and Nanoscience

Experimental techniques represent the most apparent common ground for biophysics and nanoscience. “These are techniques that allow for reaching and manipulating atoms and molecules at the nanoscale”. Maybe the best example is a scanning probe microscopy (SPM). These probe microscopes can be used either to image the honeycomb structure of graphene layers or to stretch a protein to its unfolded conformation. But maybe we can try to establish a more interesting connection between nanoscience and biophysics than just the techniques.

Can we use the lessons learned from biophysics to generate new nanotechnologies? “That is really the core of nanoscience”, Pitarke says. “We must understand the self-assembly processes found in living organisms so that we can develop new self-organized systems in a ‘bottom-up’ approach.” Then he steps back a bit to provide a broader perspective. “Nanoscience is a combination of self-assembly, manipulation, and miniaturization”. And biophysics is particularly connected to the self-assembly part. “In order to reach the dream of creating the desired nanostructure at the desired position and with the desired purpose, one needs to learn from the existing self-organization of living organisms and the rules of biology at the nanoscale”.

Nowadays there are all sorts of approaches for generating programmable self-assembled nanostructures. The most famous of them is probably DNA origami: the use of the building blocks of our genetic code in order to construct designed two and three dimensional materials. The applications of DNA origami range from encapsulation of compounds to the production of nanobots for drug delivery or circuitry for plasmonic devices. These nanotechnologies still look a bit futuristic. How far are we from making this dream come true? “Thinking that one might be able to go to the doctor, get diagnosed, and then be treated with a nanobot that delivers the required drug to the right type of cell still sounds like science fiction, but surprises are always round the corner”.

How far are we from making this dream come true?… surprises are always round the cornerPitarke is not at all naïve about the possibility that nanoscience has been hyped up and is receiving excessive attention. This translates into a seemingly unstoppable increase in research funding. “Just name the word ‘nano’ in your proposal and you might get more chances for being funded”. As the director of a nanoscience centre, Pitarke is concerned about this hype, because it can produce false expectations. “However, we should keep moving in this direction. Now we have access to the nanoscale, which we were not able to reach before. The nanoscale is the scale of atoms and molecules, where matter behaves differently, and the nanoscale is the scale of biomolecules, the building blocks of life”.

Biophysics and Nanoscience meet at Biomedicine

It is for this reason that biomedicine is moving towards nanotechnology. As of today, there are applications of nanobiophysics that are having an undeniable impact in real life. For example, next generation sequencing, which resides in our understanding of the physics of the pairing and replication of DNA strands, is a nanotechnology that has reduced the cost of sequencing a genome from billions to just around 1000 dollars and is currently transforming modern medicine. And researchers are now trying to make pocket DNA sequencers using nanopores for real time diagnostics. Clearly the potential for possible synergies between biophysics and nanoscience is limitless.

In order for these new technologies to emerge, researchers must share ideas and expertise. “One needs interdisciplinary research centres where experts of different disciplines meet and communicate. They will then be able to produce new ideas and move in completely unexpected directions”. Pitarke is however sceptic with the training of nanoscientists as such. “I of course believe in nanoscience but I do not believe in the idea of a nanoscientist. We need very well trained people with different backgrounds and a very broad view that get together and do research at the same scale. The idea of a Renaissance individual worked well in the Renaissance but not today”.

Life as an emergent property

Cells are emergent entities that are not necessarily predictable from their constituent elementsAlong our conversation, Pitarke refers to the intriguing behaviour of matter at the nanoscale. “Nanostructured matter does not behave like matter at the microscale and matter at the macroscale. At the nanoscale quantum mechanics reigns, surfaces dominate, and the physical and chemical properties of matter are size dependent, unlike at the microscale and the macroscale. One says that nano is simply different. And self-organization plays a key role here. Biomolecules can self-assemble in various different ways, thus building systems with new functions and new emergent properties, properties that were not present before and that were unpredictable”. Hence our difficulty in predicting the folds or functions of biological macromolecules, not to mention what happens at a supramolecular scale. “Life itself could be considered to be an emergent property, cells are emergent entities that are not necessarily predictable from their constituent elements”. But while evolution has made its choices using natural selection, now we have the opportunity to make completely different choices in order to produce new molecules, new materials, and new devices. “Nature has evolved in a certain given way, but for us the possibilities at hand are endless”.