A towering figure of molecular biophysics 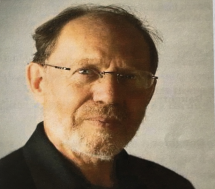 Michael G. Rossmann, a towering figure in structure biology, was scheduled to give a plenary lecture at the 69th Annual Meeting of the American Crystallographic Association – ACA in Covington, Kentucky on July 20th. His unexpected passing (May 14th, 2019 in West Lafayette, IN, USA) changed the lecture into a celebration of his scientific legacy with contributions from former students, postdocs, colleagues and the macromolecular crystallography community at large [1].

For students, postdocs and even younger practitioners of macromolecular crystallography, the name of Michael Rossmann may bring associations with obscure references in technical journals of crystallography, or more recently, reference to X-ray structures of large biological assemblies (i.e. viruses) and spectacular cryo-EM image reconstructions, without truly appreciating the monumental contributions that this premier figure of the field has made since the very early days of protein crystallography. Michael, and physicists such as John D. Bernal, Francis H. Crick and others, established the methods and the physico-chemical basis for the interpretation of biological phenomena in terms of the atomic structures of the constituent macromolecules: they provided the framework for molecular biophysics. Fortunately, a selection of Michael’s papers with some biographical notes and commentaries was published a few years ago [2], where the younger ‘apprentices’ of the field can appreciate his monumental contributions. Details of Michael’s personal biography and his connection to the Spanish community of structural biologists have been published in a recent obituary in the newsletter of the SEBBM [3]. 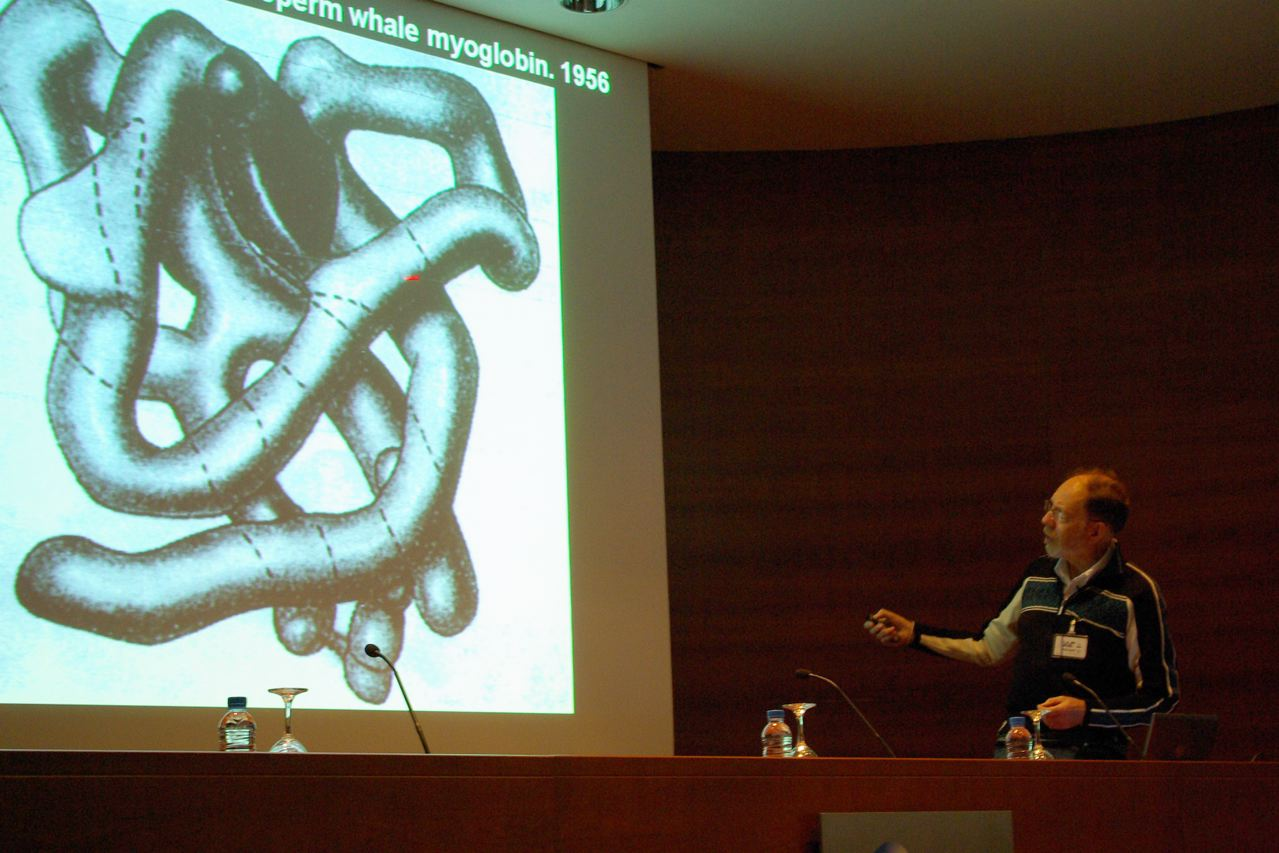 Michael presenting his recollections of the structures of myoglobin and hemoglobin at the Parc Cientific Barcelona in 2010, commemorating the 50th anniversary of the first protein structures.

Macromolecular crystallography and the broader field of structural biology would not be the same without the conceptual and methodology tools that Michael introduced, implemented and perfected during his lifetime. His group and his laboratory were the beacon of crystallography from the early 1970’s to well into the 21st century. In a perfect and effective combination, Michael always developed the new methods, algorithms and programs that would tackle the most challenging structural problems of the time. The early 1970’s unveiled the structure of Lactic Dehydrogenase (LDH), at the time the largest protein structure solved (330 amino acids), with its multi-domain architecture: NAD-binding domain (Rossmann fold) and catalytic domain. The modular architecture of protein structures was immediately seen by Michael and others (Carl Brändén, Len Banaszak) in other dehydrogenases (liver alcohol, glyceraldehyde-3-phosphate, malate) and used to emphasize the notions of molecular evolution among biomolecular entities, as he had done when the structures of myoglobin and hemoglobin were first solved in early 1960’s [2]. 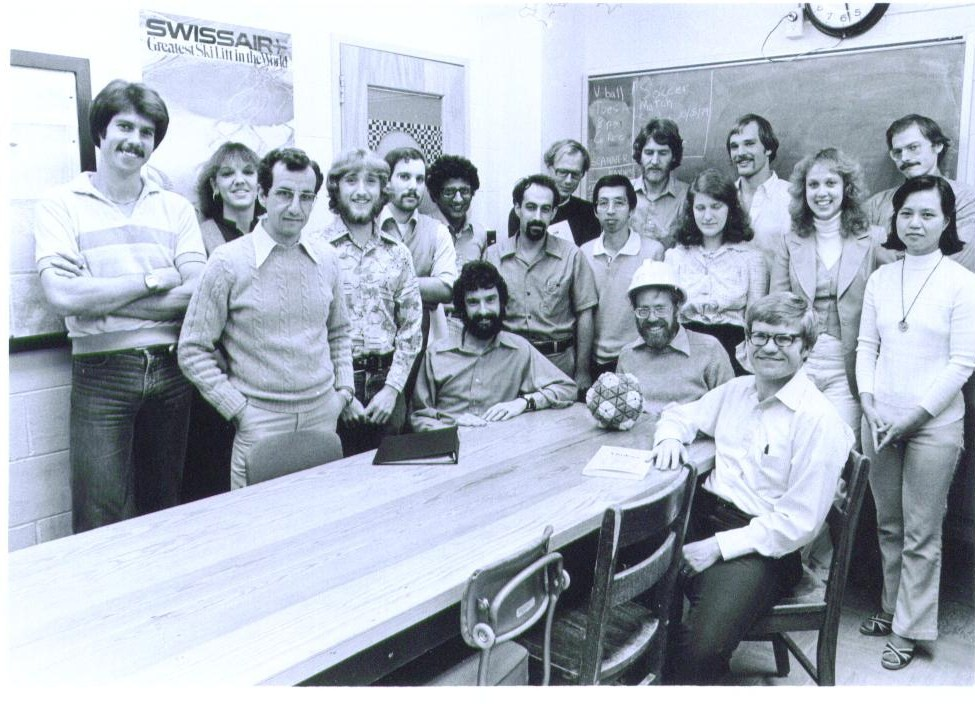 Michael’s group at Purdue University at the time of the solving of the first atomic structures of icosahedral viruses (TBSV, SBMV circa 1980). The author is standing to the right of Michael, who is wearing the hard-hat that he used to build the structure of SBMV (1979).

This accomplished, Michael went on to pursue his dream: to tackle the atomic structure of viruses, using the redundancy of information provided by the existence of non-crystallographic symmetry. The challenges of data collection and processing were handled by exploiting to the fullest the use of ‘screenless’ data collection on the rotation camera pioneered by none other than J. D. Bernal and later fully developed by Uli Arndt and Alan Wonacot. It is not fully appreciated that the use of the rotation camera was a major breakthrough in crystallography and critical for the development of macromolecular crystallography. The rotation method permitted the collection of hundreds (thousands for virus crystals) of reflections simultaneously. Pre-alignment of crystals with respect to the X-ray beam facilitated the early indexing of the patterns but this was eventually superseded by the automatic indexing algorithms also pioneered by Rossmann and others. Once again, the structures of the first viruses, TBSV (S. Harrison, 1978) and SBMV (M. Rossmann, 1980), revealed a common jelly-roll fold and gave Michael further insights into the evolution of viral capsids, which are now an established part of structural biology. The next milestone of Michael’s lab was the structure of the first animal virus, Human Rhino Virus 14 (HRV14) that came surprisingly soon (1985) after the first plant virus. This rapid success was due in no small part to the methods and programs developed to conquer the plant viruses, particularly the non-crystallographic-symmetry averaging, now combined with phase extension to higher resolution. A critical element was also the use of synchrotron radiation (SR) for data collection, which Michael also pioneered with John Erickson and the team at CHESS (Cornell High Energy Synchrotron Source). The insights into the processes of viral recognition (i.e. canyon hypothesis) and others soon followed from the initial and subsequent structures related to HRV14 [2].

The 1990’s and onto the 2010’s saw an explosion of new virus structures (Mengo, canine parvovirus, dengue and others including Zika in 2016) solved by exploiting the methodology established with the structure of rhino virus, in combination with the ‘revolution’ induced by the newest electron microscopy instruments and the concepts, methods and algorithms related to cryo-EM reconstruction also pioneered by Michael. The structures of ever larger and more complex viruses were unveiled at near atomic resolution by ‘hybrid methods’ that combined X-ray crystallography and cryo-EM. The technology was then extended to non-symmetrical, large, molecular aggregates, and continues to push the limits of what is possible structurally.

Ever since Michael moved to Purdue University in 1964, his laboratory and he and his wife Audrey Rossmann at home, hosted hundreds of postdoctoral students and associates from all over the world helping to spread not only the science but also his passion for structural biology and his immense humanity and respect for scientists young and old. In doing so, he was instrumental in allowing many of us to reach our full potential as scientists and human beings. Michael, you will be sorely missed!