A conversation with Isabel Fabregat-Romero 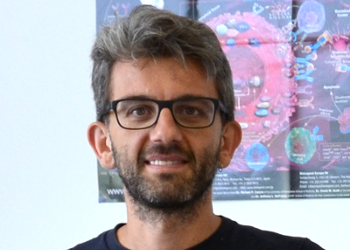 Often, when asked by freshmen students what Biophysics is, I jokingly tell them to look at the Wikipedia. Those who go beyond the first sentence, containing a formal and rather obvious definition, can read: “Biophysical research shares significant overlap with biochemistry, molecular biology, physical chemistry, physiology, nanotechnology, bioengineering, computational biology, biomechanics, developmental biology and systems biology.” But then I generally get a second question: “Does it mean that biophysics is a bit of everything?” My answer to this is obviously positive. However, I feel the need to add that being “a bit of everything” reflects the deep level of contamination and interdisciplinarity reached by life sciences in general, which I interpret as one of the strengths of modern research. In this scenario, barriers among scientific disciplines are getting fainter and precise definitions often still exist for mere practical purposes, such as labeling classes and departments.

Still, a superficial reading of the first paragraphs of the Wikipedia page might suggest that biophysics is just a container constantly being filled with whatever research goes beyond the good old biology that one can find in the textbooks, provided it has some mathematical formulas so to be associated to physics. In my personal (and obviously biased) opinion, this is a rather restrictive view, because it does not reflect one of the main contributions of biophysical research to the development of life sciences. I’ll try to expose my point.

I would not enter in the minefield of discussing whether this is actually the case or not. The fact is that an engineer-like approach that can really help to decipher all the details of living things has not been developed, at least to date. Among the multitude of bio-disciplines, the one offering the closest methodology to the one hoped for by Yuri Lazebnik is probably represented by systems biology, which has helped to understand how molecules interplay in living systems. However, if we trust Richard Feynman quote “What I cannot create, I do not understand”, to comprehend living organisms we must wait for a reverse-engineering approach, and for this, we must keep a close eye on research being conducted by the synthetic biologists. 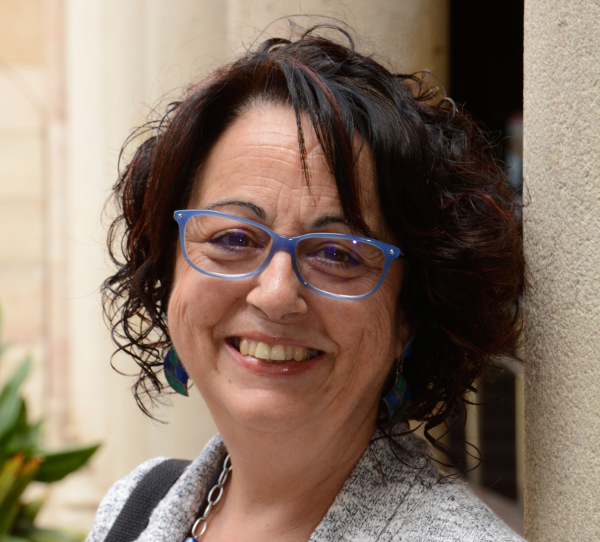 To discuss about this liaison, I met with Isabel Fabregat Romero, principal investigator of the research group “TGF-beta and cancer” at IDIBELL and CIBEREHD, associate professor at the Universitat de Barcelona and president of the Spanish Society for Cell Biology – SEBC.

CM: It is still rather rare to find a woman at the top of a scientific institution.

IF: Indeed, men continue to outnumber women in management positions at the university and research institutes. Sometimes, women are less ambitious and are afraid to get top position that would rob a lot of time from their private life. My situation was slightly simplified by the fact that I gave birth to my daughter at a relatively young age, so when I started as an independent researcher, she did not need the care of a newborn and I could dedicate myself to building up my research group. As a scientist and as president of the SEBC, I am trying to push young female researchers to pursue their careers. I try to convince them that both professional and personal life can be compatible if the time is well distributed. Something is moving, see e.g. the fellowship programs favoring mothers, but more efforts are needed.

CM: you have been president of the SEBC for almost 8 years. What has been the main focus of your term? What’s the balance?

IF: As a small society, we preferred not to take part in big actions. We have rather attempted to build up a society of loyal and active members, providing financial support – mainly directed to young fellows – for participation to conferences and for doctoral studies. We have been working to improve the scientific level of our annual congress that in recent years has reached the international stage. We have incorporated sponsoring companies and, overall, we have been able to increase the number of members by about 25% during my two terms.

IF: It is definitively true, producing and publishing relevant research requires the fusion of elements coming from several disciplines. Classifying most of the modern publications among cell biology, molecular biology, biochemistry and biophysics has become rather tricky due to the intermingling of these subjects. In the last years, in my research field (cell biology of cancer), I have also noticed that clinicians are increasingly appreciating the contributions from basic sciences. This is happening in spite of differences in language and jargon and the passive resistance of some old school mindset that can sometimes make communicating with each other difficult. I see this contamination very positively: in this way, we can genuinely link basic and applied research to obtain the so coveted translational research, besides the promises of research proposals. Moreover, this is the way to go to enable in a near future personalized treatments, taking into account the patients’ variability and cancer mutations.

CM: In this interdisciplinary scenario, what is the role of a society focused on a single discipline?

CM: How do you think biophysicists are helping or can help the cell biologists?

IF: If I think about biophysics, microscopy is the first thing that comes to mind, due the massive use that biologists make of it. The recent advances in super-resolution techniques are providing a new view on many cellular processes. However, I find that many biologists are not fully aware of the potential of these novel techniques. Moreover, the fact that they are still evolving and thus often require the support of experts is probably preventing a wider application in our field.
Along the line of my research, concerning signaling in liver cancer through clinical and animal model studies, it would be extremely informative to apply the new tools of cell mechano-transduction, to get more insights on collective migration, cell contractility, cell-cell interactions and its relation to cancer. I would really love to start a collaboration on this topic.

CM: Earlier, you mentioned the use of personalized medicine and the differences found in patients with same conditions/treatments. This somehow connects to the current discussion on data reproducibility, p-hacking, …

IF: Besides fraudulent cases of misuse of data analysis, which I think will be highly reduced by the public sharing of the raw data required by many journals, there are other aspects that I consider important in relation to the use of statistics. In particular in clinical studies, it is not rare to find highly heterogeneous datasets. The heterogeneity reflects significant characteristics of the sample and, as such, should be taken into account. Just to keep it simple, if we find differences of up to two orders of magnitude when measuring the level of a marker in cancer patients, by summarizing the data through their average we throw away a lot of useful information. Methods to properly condense and represent these data without washing out their heterogeneity must be definitively popularized and diffused among experimentalists.
More generally, we often deal with data that require advanced statistical treatment, beyond the classical methods. However, sometimes they are treated by means of textbook statistical analysis, just because the journal demands for a p-value and one does not know what else to apply. This is partly caused by the lack of training in statistics provided to biology students. Considering the importance of quantitative experiments and data analysis, the teaching of statistics must be definitively potentiated.

Before the interview, I had prepared a list of questions, but I could not ask them all. Actually, I only asked the firsts two or three of the list. From that, the chat flew naturally: more and more hints for further discussion were popping up. I was noting down Isabel’s answers and, at the same time, using a corner of the page to quickly log reminders of new topics, about which I would have liked to know her thinking. Stepping down the stairs of IDIBELL, I was recalling all the questions I did not ask, while trying to figure out the punch line of the interview. All in all, forcing a bit the definitions, I felt like embedded in a hypothetical fractal structure: science itself – as well as many of the systems it studies – can be analyzed in a reductionist fashion, one discipline at the time. It is up to us to contaminate the disciplines, so that emergent properties can arise.