Cryo-EM: an Emergent Structural Biology Technique for the Visualization of Macromolecular Complexity 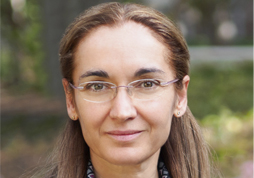 Structural visualization is invaluable for a mechanistic understanding of macromolecular function. X-ray crystallography is a very effective method to produce atomic models of proteins and nucleic acids, but suffers from the requirement of large amounts of sample and the bottleneck of crystallization. On the other hand, NMR needs also large sample amounts and requires isotopic enrichment. Such constrains have imposed limitations in the application of X-ray crystallography and NMR to large macromolecular complexes, integral membrane proteins, polymers or macromolecular samples with coexistence of multiple conformational or compositional states. Single particle cryo-electron microscopy – cryo-EM is a structural biology technique applicable to the study of challenging biological systems, for which crystallization is not required and only small amounts of sample are needed. Furthermore, via computational classification this technique has the potential to deal with compositional and conformational mixtures. Single particle cryo-EM has just taken a quantum leap in applicability and achievable resolution, gaining worldwide attention (see Nogales and Scheres 2015 for a recent review).

Biological samples can be directly visualized at the molecular level using transmission electron microscopy – TEM. TEM images are 2D projections of the structure in the direction of the electron path that can be combined via 3D reconstruction. The first applications of 3D-EM used helical principles to combine the multiple views of the molecule naturally present in assemblies, such as phage tails or helical viruses (DeRosier and Klug 1968). 2D crystals later became favorite samples to pursue high-resolution structures using a combination of images and electron diffraction. This type of sample required tilting in order to obtain different views of the molecule (technical issues made this a lengthy process), but did produce a number of atomic models, including those of bacteriorhodopsin (Henderson et al. 1990), tubulin (Nogales et al. 1998) and aquaporin (Gonen et al. 2005). In the most general implementation of 3D-EM, the sample is made of individual macromolecular complexes (single particles) that adopt random (or at least multiple) orientations on the EM grid. This single particle methodology uses computational tools to define the relative orientations of the projection images and produce a 3D reconstruction (Frank 1996). While helical Fourier methods and 2D crystallography pioneered the 3D-EM field, the general applicability of single particle analysis makes it often the technique of choice today.

Biological samples can be stained (typically with uranium salts) and dried, or studied in a frozen hydrated state after vitrification (cryo-EM), in order to withstand the high vacuum in the electron microscope and minimize radiation damage. Negative staining is limited in resolution to about 15 Å due to the grain size of the stain, but it is useful in the study of small macromolecules (< 250 kDa), and for ab initio reconstructions that use geometrical principles (see below). On the other hand, cryo-EM of frozen hydrated samples has the potential to produce atomic resolution structures. This potential has been realized for single particle studies with the use of new detectors that have drastically improved image contrast and resolution, and with the implementation of powerful new image processing algorithms.

The two major challenges in single particle 3D reconstruction concern the noisy character of the images and the need to computationally identify their relative orientations. The first arises from the need to minimize radiation damage, using very low electron doses (~20-40 electrons/Å2). In order to gain signal, tens to hundreds of thousands of images need to be averaged. A generally used method to deal with the second is to compare each experimental particle image with computationally generated views of a 3D reference that resembles the true structure (“projection-matching”, Penczek et al. 1994). Initial reference structures may need to be determined de novo from EM images, using geometry-based approaches (in which two or more images of the same area of the specimen at different tilt angles are imaged) that are generally considered robust and provide information on the handedness of the structure. They include the Random Conical Tilt method – RCT (Radermacher et al. 1987), the orthogonal tilt reconstruction – OTR (Leschziner and Nogales 2006) and tomography (Lucic et al. 2005). Alternatively, the relative orientation between particle images can be analytically determined using the fact that each pair of 2D projections shares a “common line” in the 3D Fourier transform. The angular reconstitution method is a real space implementation of common lines principles (van Heel 1987).

Often, cryo-EM samples present the additional challenge of conformational or compositional heterogeneity. The analysis of such samples requires classification of the particle images into structurally homogeneous subsets. This task can be done using the geometry-based principles initially, then through the use of more than one reference structure for projection-matching. Alternatively, maximum-likelihood approaches for unsupervised classification methods have been implemented (Scheres et al. 2007) to simultaneously determine coexisting structural states. While computationally demanding, the final outcome of identifying and characterizing multiple molecular states is to provide invaluable insight into the dynamics of the sample.

The 3D-EM field has evolved very dramatically since its first application to the T4 phage tail with the development of both, instrumentation and image processing methods. But advances have never been as transformative as during the last two years, with the commercialization and use of direct electron detection cameras. The new detector technology results in images with notably higher contrast, which together with their fast read out allow for a “movie mode” of data collection that significantly overcomes the limitation of beam-induced motion. An effective correction of this phenomenon is obtained by splitting the total dose into short frames (e.g. 20, with typically 1 e/Å2 dose each), followed by computational frame alignment that minimizes the blurring caused by beam-induced movement (Brilot et al. 2012, Campbell et al. 2012). The particle images, having higher signal-to-noise ratios, can be aligned more accurately and contribute to higher resolutions. In turn, higher resolution references lead to even more accurate alignments, resulting in a strong synergistic effect. The improvement in detector technology has not only lead to higher resolution with smaller data sets (Bai et al. 2013), but has also moved the lower size limit (towards smaller complexes/molecules) of the samples that can be studied in a frozen hydrated state (Liao et al. 2013), and allowed better classification of heterogeneous samples, leading to the identification and description of even rare states (Fernandez et al. 2013).

The lack of a crystallization requirement and the use of conditions where macromolecules are fully active allow 3D-EM studies the description of multiple functional states in a mechanistic cycle. We have used 3D cryo-EM to describe the structure of microtubules in different states to gain information on their dynamic behavior.

Microtubules (MTs), formed by the self-assembly of αβ-tubulin, undergo dynamic instability (Mitchison and Kirschner 1984), consisting on the stochastic switching between growth and shrinkage driven by GTP hydrolysis. While only GTP-bound tubulin incorporates efficiently at growing MT ends, polymerization is coupled to GTP hydrolysis. A MT switches from a growing phase, when its end is capped by GTP-bound tubulin, to a shrinking phase, when its “GTP cap” is lost (Mitchison and Kirschner 1984). MTs can be stabilized against depolymerization by non-hydrolizable GTP analogs (Hyman et al. 1992) and by a variety of anti-tubulin drugs, some of which are used as anticancer agents (Dumontet and Jordan 2010). In the cell, MTs interact with a number of factors that regulate their dynamics. In order to understand dynamic instability, it is necessary to define the consequence of nucleotide state on microtubule structure and the effect of regulatory factors. 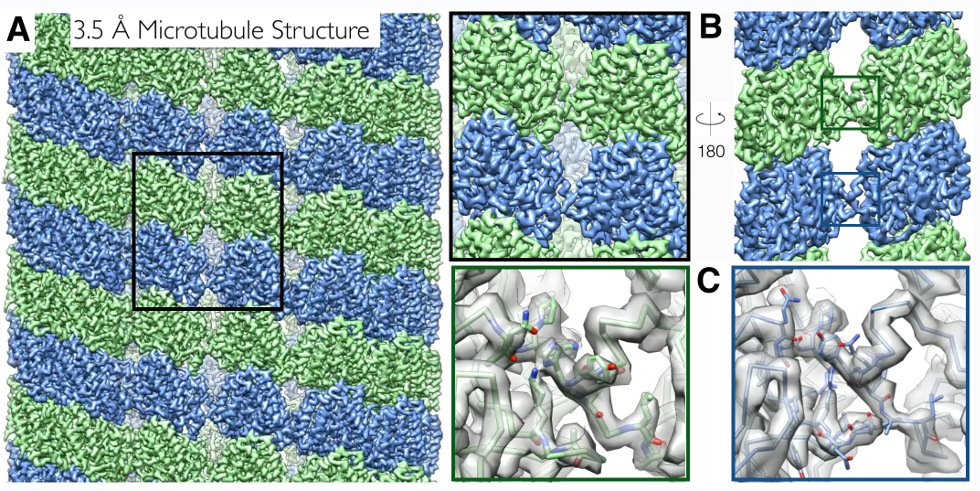 Figure 1. High-resolution Cryo-EM Structure of the Microtubule. (A) Cryo-EM map (3.5 Å resolution). α-tubulin, green, β-tubulin, blue. (B) Boxed region from (A) showing the lateral interaction of two dimers, viewed from the outside (left) and inside (right) of the microtubule. (C) Atomic details of the lateral contact between α-tubulin subunits, left, and β-tubulin subunits, right (R. Zhang et al. 2015).

Our lab previously reported cryo-EM reconstructions of dynamic MTs and MTs made of tubulin bound to GMPCPP (a slowly-hydrolizable GTP analog), reaching resolution better than 5 Å. These structures were used in conjunction with Rosetta molecular modeling to generate pseudo-atomic structures that illustrated the changes in tubulin upon GTP hydrolysis within the MT (Alushin et al. 2014). In our most recent studies of MT structure (Zhang et al. 2015), we have used a direct electron detector and improved data processing strategies to obtain cryo-EM reconstructions of MTs at 3.5 Å or better resolution (Figure 1). At this resolution, side-chain densities can be seen for most residues, with the noticeable exception of those from acidic residues (Glu and Asp), presumably due to radiation damage during electron exposure. Our studies have now allowed us to visualize the consequences of nucleotide hydrolysis (Zhang et al. 2015), the effect of the anticancer drug Taxol (Alushin et al. 2014), and the interaction of MTs with the regulatory protein EB3 (Zhang et al. 2015).

The high resolution of our MT structures allows, for the first time, the atomic description of the lateral contacts between protofilaments (the rows of tubulin heterodimers that run along the length of the microtubule; Figure 1C). Our analysis has now showed that these lateral contacts do not change significantly with nucleotide state. The lateral interface is limited to a single point of contact, with exquisite shape complementarity, that resembles a lock-and-key configuration. The M-loop of both α- and β-tubulin positions a strategic aromatic residue, H283 in α-tubulin and Y283 in β-tubulin, to function as the “key” that inserts into a complementary “lock” formed by the H2-S3 and H1’-S2 loops on the subunit across the interface.

Studies like the one just described demonstrate that microtubules are structurally tractable by cryo-EM at resolutions now approaching those obtained by X-ray crystallography, thus enabling the detailed study of nucleotide and drug effects, or the interaction of microtubule binding proteins, in the context of the native tubulin polymer.

Challenges for the Future

Single particle cryo-EM has emerged as a powerful alternative to X-ray crystallography and NMR that is broadly applicable. Recent technical breakthroughs, both in instrumentation and image processing software, have dramatically increased the achievable resolution, the throughput and the capacity of cryo-EM to describe conformational and compositional mixtures. As a consequence, a flood of biological insight is being gained on systems traditionally refractant to structural characterization, and many new researchers have entered the cryo-EM field. Still, significant technical issues remain: complexes smaller than 200 kDa are challenging, fragile samples may fall apart during cryo-EM grid preparation and existing image classification algorithms cannot yet deal with continuous forms of structural variability. Further developments in sample preparation, hardware and software should lead to more improvements in the future.