Life through a hole 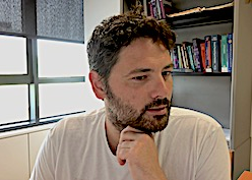 “Socrates: To them, I said, the truth would be literally nothing but the shadows of the images”. Plato, The Republic (Book 7).

Using Plato’s allegory, we can imagine light entering through a window in a sunny day. If by chance a bird crosses the window, its shadow would be projected into the wall. More precisely, rather than its shadow being projected into the wall there will be a decrease in the amount of light, a decrease with a specific pattern. Usually, just looking at the decrease we may identify the object that caused it and conclude that a bird passed through the window. Now, take the window and make it a thousand times smaller. An ant passing through this aperture will cause a measurable decrease in light and based on it we could be certain that it was an ant that passed through. Continue and make the window a further thousand times smaller and the experiment begins to fail, because the light associated wavelength is comparable to the size of our tiny window and it diffracts. Make it even a thousand times smaller (i.e. 1 nm) and almost not light passes through.

We can use ions instead, which have a size of few Ångströms and much smaller wavelengths and they pass through 1-2 nm wide apertures as particles, rather than waves. Molecules with a size comparable to the aperture diameter modulate this ionic current pretty much in the same way an ant modulates the light passing through a millimeter sized window. It is therefore possible to gather information about single-molecules just by looking at the “shadows” they produce on the ionic current flowing through a nanopore (i.e. a nanometer wide aperture) when an electric potential is set across (Fig. 1).

Figure 1. Single-molecule measurements with nanopores. a) Two chambers are separated by a lipid membrane to which an electric potential is applied, (ions cannot flow through the membrane). The insertion of a nanopore causes a stepped increase in the ionic current (displayed below) as ions start to flow through it. b) An analyte interacting with the pore obstructs the ion flow (II). The ionic current signal (II, displayed below) has a characteristic current level, dwell time and noise. The original ion current is recovered once the analyte leaves the pore.

There are two different kinds of nanopores: Those made on a solid surface, typically by bombarding the surface with a focused beam of high-energy ions, and those made on lipid membranes, typically by pore forming proteins. The advantage of the former is their robustness, but they lack reproducibility on pore shape and dimensions. The advantage of the latter is the high reproducibility on pore shape and dimensions, but face challenges associated with fragility of lipid membranes. Nonetheless, recent advances are contributing to overcome those limitations. For example, membranes formed by crosslinked lipids can now last for weeks or even months [1]. Advances like this are allowing nanopore technology to show its full potential.

It was shown from very early on that nanopores can distinguish small organic molecules based solely on the ionic current signature produced when the molecule interacts with the lumen of the pore [2]. Nanopores can act as detectors, telling apart organic molecules bearing an amine instead of a carboxylic acid group at concentrations in the low μM range. 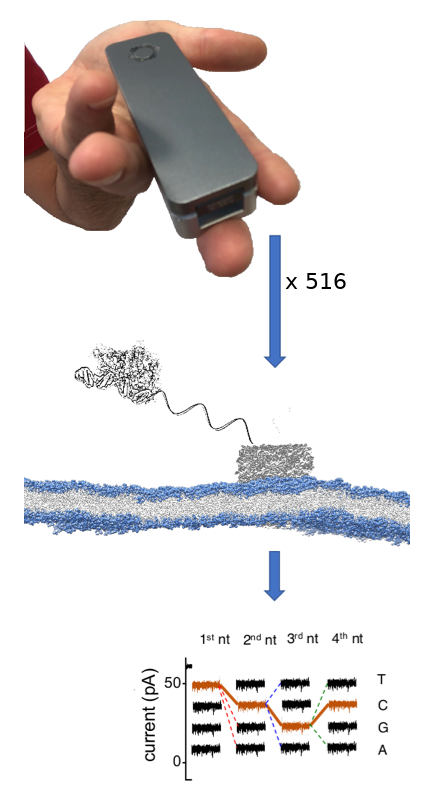 Figure 2. Sequencing DNA with nanopores. One of the commercial DNA sequencers currently at my lab (used for different purposes though) is shown on the top figure. The device is connected to a computer through an USB, which provides the energy to run it and is used to pass the raw data to the computer. Inside the device there is an array of 516 wells roughly 100 μm in diameter. Each one contains a lipid membrane with a single hemolysin pore inserted (middle). The DNA is translocated base by base through the combined action of an applied electric potential and a molecular motor (which slows down translocation). The ionic current signals (bottom) show different levels depending on which nucleotide enters the pore. From the recorded signal (represented in brown) the sequence of nucleotides can be deduced.

Additionally, nanopores may also function as nanoreactors [3]. A reactant quinone molecule covalently linked to the pore can be observed to react with a thiol to form a substituted hydroquinone by 1,4-Michael addition. Because the system contains just a single molecule of reactant, the kinetic steps of the reaction can be observed regardless of them being rate limiting or not. The measurements are so precise that they allow to distinguish between hydrogen and deuterium! It is worth mentioning that in addition to this sensitivity and specificity, the measurements can be made using small sample volumes. Actually, very small volumes! Measurements have been carried out using nanoliter droplets [4] and it is possible to measure ionic currents produced by a single channel at the cell membrane [5]. The limitation is not in the measuring volume but on how to manipulate and make electrodes for picoliter droplets.

Due to this set of features, nanopores have attracted much interest for their potential biomedical applications. In particular on the feasibility of using nanopores to sequence DNA [6]. The idea behind is quite simple: a strand of DNA is electrophoretically driven through the nanopore. The strand slides through the nanopore such that nucleotides are translocated one after another, producing a specific ionic current level for each base (Fig. 2). Ultimately, from the ionic current levels the sequence of DNA can be inferred. Several features of this sequencing method must be highlighted to illustrate the breakthrough:

Overall, nanopores provide a cheap and fast DNA sequencing platform that does not require DNA amplification and can be carried out in small, USB-driven, devices [8]. This has allowed to carry out real-time tracking of Ebola [9] and Zika [10] virus bursts in harsh environments, or to carry out the first DNA sequencing outside the Earth [11] (at the international space station). 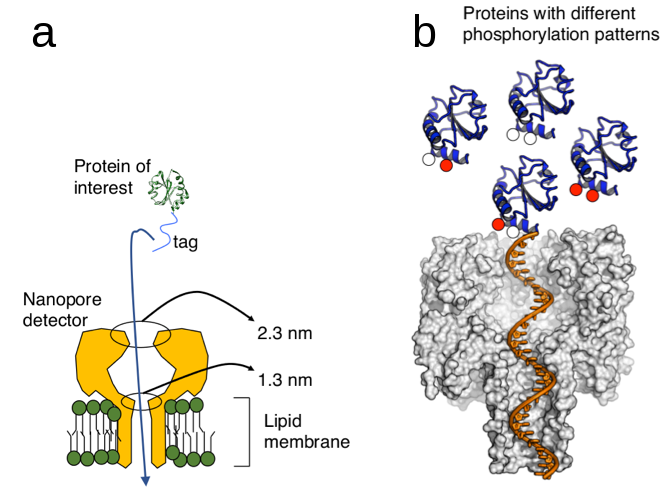 Figure 3. Sequencing proteins with nanopores. a) A protein is driven to a hemolysin nanopore by pulling from a tag chemically attached to one of its terminus. In response to the pulling force, the protein unfolds and translocates through the nanopore. b) Different isoforms of the same protein can be obtained through phosphorylation of specific residues (spheres, red –phosphorylated, white –non-phosphorylated). In reference [13] four isoforms where subjected to translocation through a nanopore and it was shown that they can be distinguished based on the ionic current signals.

While DNA sequencing with nanopores is impressive, the best about nanopore applications may be still to come. Nanopores may also be used to unfold and translocate proteins [12] (Fig. 3) and there is growing interest on single-molecule protein sequencing using nanopores. This suggests an immediate question: is the goal of sequencing the proteome comparable to that of sequencing the genome? Undoubtedly it would place us in a more quantitative description of life. How many copies of a protein must be synthesized in order to develop a phenotype? How many of these must be phosphorylated to change the cell status? How do all these numbers change along the cell cycle or upon receptor binding to its ligand? We do not know the answers yet, but we can be sure that proteome sequencing would allow scientists to address those and many other new exciting questions.

From a technical point of view, if nothing else, the task is enormous. First, it is not four bases that need to be discerned from the ionic current signal but twenty amino acids and a large number of post-translational modifications. Second, the biophysics of protein translocation through a nanopore is not yet well understood. And third, we lack tools to control the speed and direction of the protein translocation process. Nonetheless, research is moving forward and milestones are being reached. For example, it has already been shown that it is possible to deduce the phosphorylation pattern of single protein molecules as they translocate through a nanopore [13] (Fig. 3). Also, the ClpX molecular motor has been successfully used in combination with a nanopore detector to provide some control of the translocation process [14]. And last, but not least, the current revolution on machine learning methods provides a set of tools ideally suited for the task of distinguishing the myriad of different ionic current signals that are expected.

Figure 4. Multiplexed nanopore measurements with single-molecule labelling. a) A DNA molecule is driven through the nanopore. The DNA has dumbbell structures along its sequence, built using DNA origami principles. b) The DNA is divided in two parts, one where structures are built in a given order to provide a label, and a second part where the DNA is functionalized with an antigen. c) The ionic current signal shows spikes caused by the presence of a dumbbell structure. The order and number of spikes is read as a binary code. Finally, the second part of the DNA translocates the nanopore. The presence of a spike in the ionic current signal is caused by the binding of an antibody. Adapted by permission from Springer Nature: Bell & Keyser. Nat Nanotechnol 2016, 11: 645 [15], Copyright (2016).

In addition to research on the biophysics of membrane protein translocation and on developing single-molecule protein sequencing approaches, research on my lab is focused on multiplexed diagnostics. Multiplexing refers to the ability of a nanopore to provide more than one diagnostic. This is achieved by making single-molecule labels that can be read with a nanopore, and covalently linking them to a diagnostic molecule that can be also examined with the nanopore. A potential application was shown by attaching labels to specific antigens [15]. Reading these labels through a nanopore provided the identity of the antigen and whether it had an antibody bound (Fig. 4). Future developments may allow the simultaneous detection of antibodies, protein biomarkers and small organic molecules (including hormones and metabolites) to provide a high-resolution snapshot of the health status from a single drop of blood within minutes.